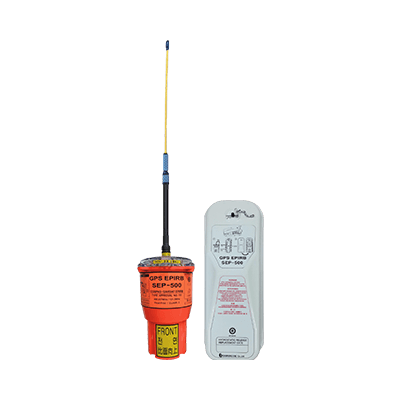 What is An Emergency Position Indicating Radio Beacon (EPIRB)?

Emergency Position Indicating Radio Beacon (EPIRB) is a device to alert search and rescue services (SAR) in case of an emergency out at sea. It is tracking equipment that transmits a signal on a specified band to locate a lifeboat, life raft, ship or people in distress.

AN EPIRB is a SECONDARY means of DISTRESS alerting which is to say that it comes later in the hierarchy of alerting SAR authorities in case of distress.

It is mandatory to carry one EPIRB on every ship and two EPIRBS for all Registered ships (and other types of vessels).

How Does An EPIRB Work?

The device contains two radio transmitters, a 5-watt one, and a 0.25-watt one, each operating at 406 MHz, the standard international frequency typically signalling distress, 406MHz.

The 5-watt radio transmitter is synchronised with a GOES weather satellite going around the earth in a geosynchronous orbit.

An EPIRB transmits signals to the satellite. The signal consists of an encrypted identification number (all in digital code) which holds information such as the ship’s identification, date of the event, the nature of distress and chiefly, the position.

The Local User Terminal (satellite receiving units or ground stations) calculates the position of the casualty using Doppler Shift (is the change in frequency or wavelength of a wave (or other periodic events) for an observer moving relative to its source).

The LUT passes on the message to the MRCC (Mission Rescue Co-Ordination Centre). Furthermore, the MRCC is responsible for the SAR ops and oversees the execution of the rescue mission.

The EPIRB needs to be activated to emit signals. This could be done by pushing a button on the unit, or it could happen automatically if and when it comes in contact with water.

The latter variety is known as hydrostatic EPIRB; the quality makes hydrostatic EPIRBs the best choice for sailors because they could be automatically activated in case the ship or vessel meets an accident and finds itself in deep waters.

The point to be kept in mind is that EPIRB needs activation to be operative, and this could happen only when it emerges from the bracket it is placed in. This could be done manually or it could happen automatically, as said earlier. The device is essentially battery-operated. This helps because power is the first entity to be affected in case of a calamity.

It is possible that the EPIRB might get activated by mistake by an individual onboard. In order to prevent a chain of SAR operations in motion, it is imperative that the EPIRB false transmission is cancelled. In case the EPIRB is falsely activated, the nearest coast station or RCC (Rescue Co-Ordination Center) must be informed immediately of this event and as mentioned, cancel it.

The cancellation intimation must also be sent to the appropriate authority (for example, DG Shipping for Indian Registered Ships or for ships plying in India waters when the false alert is transmitted). The shipowner and/or the agent must also be informed.

The EPIRB operates under the following situations.

The users of 406MHz beacons need to fill out the registration card containing vessel name, Identification Data and Nationality and register the equipment to the government and the service company. If you use unregistered equipment in the emergency situation, the search and rescue
operation cannot be done immediately owing to nothing information about ships in distress. The SEP-500 GPS EPIRB will be delivered to the customers after saving all information for the users.